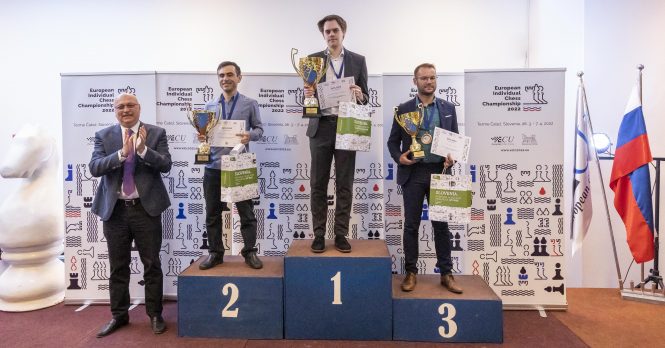 After 11 played rounds with more than 300 participants, German Grandmaster Matthias Bluebaum (GER, 2642) won the Championship scoring 8 points. Bluebaum maintained the leadership from the 5th round and in the end tied for the first place with Sargissian Gabrial (ARM, 2681) who had the same score.

Results and standings can be found here.

The Closing Ceremony of the Championship took place yesterday evening after the end of the last round.

ECU President Mr. Zurab Azmaiparashvili officially declared the event closed and took part in awarding ceremony of the winners. Deputy mayor of the Municipality of Brezice Mr. Bogdan Palovsnik awarded the Winners of the special prizes.

The best Juniors U18:

The European Individual Chess Championship 2022 is qualification event for the next FIDE World Cup. According to decision of the ECU Board and FIDE regulations, the best ranked 20 players qualify. As two players: Bluebaum Matthias and Yilmaz Mustafa qualified for the FIDE World Cup 2023 at European Individual Chess Championship 2021 in Reykjavik, practically best 22 players are qualifiers from this tournament.

Besides the regular prizes and special prizes, 26 players achieved FIDE titles norms. At the end of the tournament, Tournament Director Nina Rob delivered the ECU flag to Stephane Escarfe and the French Chess Federation for the organisation of the upcoming Mitropa Cup 2022.