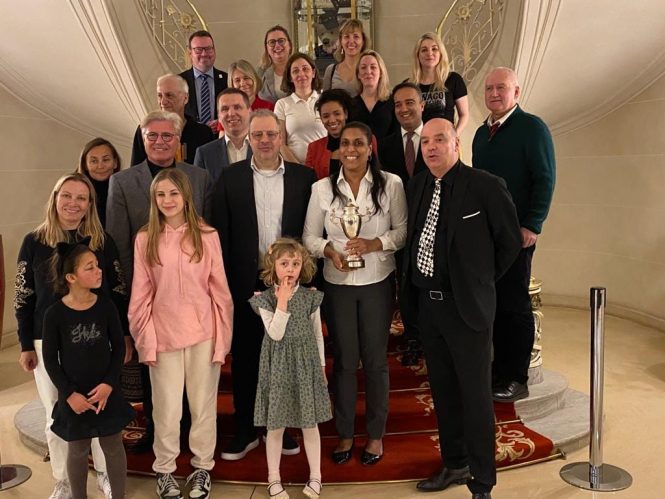 The chess legend GM Pia Cramling was awarded with the Special Prize for her contribution to chess. The Prince Albert II of Monaco took part in the ceremony and distributed the special prize to GM Pia Cramling.

The special LIVE Stream Debate Show for the promotion of Women’s Chess was held on Saturday afternoon, and it was broadcasted through ECU Facebook page and ECU Twitch channel.

Sonja Johnson, Chairperson of FIDE Planning and Development Commission, moderated the debate. ECU President Mr. Zurab Azmaiparashvili and ECU Vice President and FIDE CEO Mrs. Dana Reizniece-Ozola were first to join the live studio and discussed the impact of Women in Chess, as well as the impact on Chess by Women. They also explained what are the steps to improve Women’s position in chess society.

Sonja Johnson then hosted IM Eva Repkova – ECU Vice President and the Chairperson of FIDE Women in Chess Commission, together with Jean Michel Rapaire – Chairman of ECU Women’s Commission and President of Monaco Chess Club. They discussed the importance of FIDE Decision to declare the year 2022 as the Year of Women in Chess.

Shortly after, GM Pia Cramling and IM Paehtz Elisabeth joined the ECU studio with Sonja Johnson and spoke about their chess careers and personal experiences and thoughts about women position in chess.

The famous chess couple WGM Monika Socko and GM Bartosz Socko joined the studio and spoke how the everyday life looks in the house of two chess players.

Women’s Chess Champion of Monaco WGM Dornbusch Tatiana and 14 years old chess talent from Monaco Berezovsky Fiorina were the last to participate in the debate. They expressed their feelings about the European Women’s Chess Gala taking place in Monaco.

The second day of the event opened with a tournament for youth. The best ranked players got prizes, and the best girl player was awarded with the special prize.

On Sunday afternoon, the Blitz Gala Tournament with participation of special guests and VIP persons took place in Hotel Hermitage.

Rankings and results can be found here.