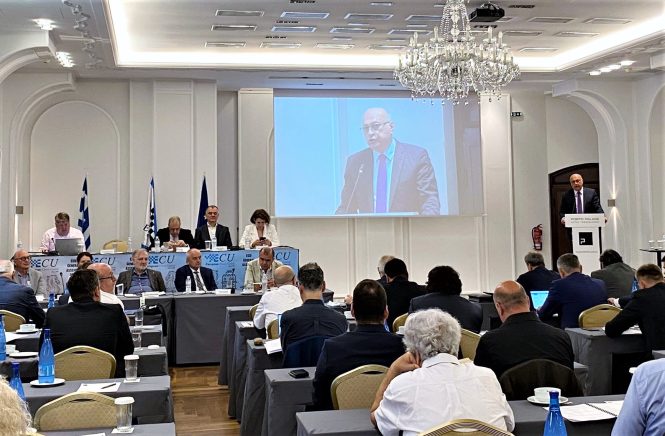 Τhe ticket of Mr. Zurab Azmaiparashvili was elected with 44 votes in favor, 2 blank and 3 invalid ballots in a total of 49 votes cast:

Followed the individual elections for the three (3) ECU Vice Presidents
49 federations voted, each candidate needs 50% + 1 vote to be elected:

The following competitions were awarded to the respective venues:

Belarus Delegates addressed the General Assembly requesting the lift of the sanctions decided by the ECU Board on 3rd March 2022 for Russian and Belarus Chess Federations.

After discussion the ECU General Assembly delegates voted on the item 9.1 of the agenda and decided that the sanctions which imposed by the ECU Board decisions on 3rd March 2022 to Russian and Belarus Chess federations shall remain in force and shall not be amended or lifted.

The letter of the Chess Federation of Russia informing ECU that they applied to transfer to the Asian Chess Federation and then they will withdraw from European Chess Union was discussed in ECU General Assembly.

The ECU Board noted that there is an unclear procedure to change Continent and FIDE shall clarify its regulations before any application be examined. A letter to FIDE and FIDE constitutional commission will be drafted and sent in due time asking for clarifications about FIDE Charter and membership obligations as also to be developed regulations on federations transfers from one Continent to another since the FIDE Charter does not foresee such action.

The General Assembly unanimously authorized the ECU Board to make all necessary steps to protect the interests of European Chess Union respecting ECU and FIDE Statutes.