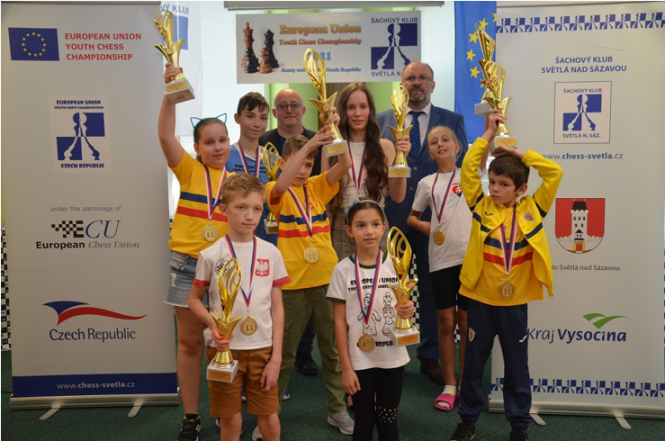 The last rounds were full of fights and tension. Vladimir Sofronie (ROU) took the first place in Open U8 category, the second place came to Maksymilian Janeczek (POL) and Stepan Kroulik (CZE) was third.

Final rankings of all sections can be found here.

Players who took first three places in each of categories got a cup and diploma. Every participant of EUYCC got a medal. All eight EU champions are leaving Kouty nad Desnou with a notebook! The next five players in each category also got valuable prizes. Every player got a T-Shirt with a logo of EUYCC.

The prizes were given by director of the event Mr. Zdenek Fiala together with the tournament director of ECU Mr. Petr Pisk. EU Youth Chess Championship 2021 under the patronage of the ECU was organized by Sachovy klub Svetla nad Sazavou in cooperation with the Czech Chess Federation. Boys and girls have played in the same tournament. Eventually boys and girls were evaluated separately. Championship had 81 players from 10 federations. All games were on-line transmitted.

On Friday morning there was a return simultaneous game with IM Petr Pisk.  There were 11 players, who had as Petr Pisk 30 minutes on their clocks. The result was 8,5 : 2,5 for IM Pisk (Marian Jurky (SVK) won and draw was made by David Kluska (SVK), Jan Bara a Vit Vilimek (both CZE).

Participants of the championship had available many leisure time activities. In the hotel, they could use a swimming pool, wellness, sauna, table tennis, bowling, pool, etc. On the official website organizers placed a photo gallery from the tournament and other activities.

The final report of the Organizers can be downloaded here.