With just one round to go Russian GM Evgeny Najer is a sole leader in the European championship following his victory in the tenth round on Ukrainian Anton Korobov. 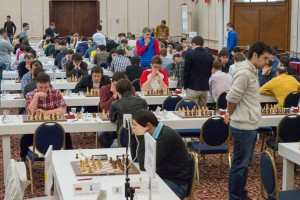 The thriller of the round was the final phase of the game between Russian Denis Khismatullin and Ukrainian Pavel Eljanov (see below). The remaining top games Sjugirov vs Navara; Nepomnianchtchi vs Popov; Illijushenok vs Sargissian; Volokitin vs Motylev; Rodshtein vsBartelended in a draw. Behind the new leader Khismatullin& Navara are now the runners up. The great local story of the tenth round still belongs to two untitled Israelis who have already experienced here quite a few glorious moments. Pinchas Kantarji carried on his stunning achievements beating Georgian GM Levan Pantsulaia thus he is now on 6.5 points and in addition to his third IM norm he has already secured a second GM norm! Ohad Kraus, who had already scored an IM norm in the previous round surprised again, this time beating current Israel champion GM Victor Mikhalevski and he has scored already 6 points!  Another Israeli youngster Ori Kobo drew with GM Artyom Timofeev and consequently he is on 5 points scoring his final IM norm.

The standings at the top is as follows: Najer 8; Navara & Khismatullin 7.5 eac. 15 players have 7 points and 25 other players are on 6.5 points. Saturday is a day off and the majority of the participants are to join a city tour in Jerusalem. The last round will start on Sunday at 13.00 in hotel Ramada. The fate of the continental title will be decided in the games Khismatullin vs Najer and Navara vs Cheparinov. 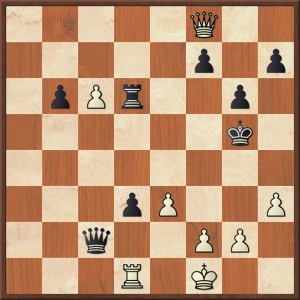