Big favourite Socar from Azerbaijan confirmed this evening all the predictions, getting the overall European title this evening on the last day of Bilbao Chess 2014. Batumi from Georgia surprised those present by winning the women’s European title, even if they were not initially regarded as strong candidates. 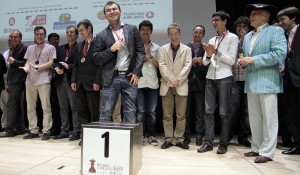 Socar started out as favourite owing to the strong lineup with which they were participating in this year’s European Club Cup, including Topalov and Mamedyarov, two of the world’s top 10 players.

The Bilbao Chess 2014 honour roll was completed at the Grand Slam Masters Final with five-times world champion Viswanathan Anand’s victory. As well as getting the title, the Indian player did his personal best ever in the five times he took part in the Bilbao competition. However, he lost his last game against Aronian, the reigning champion until this evening. With this victory at the Masters Final, Anand, who is also preparing for the World Championship rematch against Magnus Carlsen, who took the title away from him a few months ago, adds to his r?sum? the one title that was missing so far. The Bilbao Grand Slam Masters Final is one of the most prestigious tournaments in the world, as well as one of the few in reaching level 22, the highest in terms of competitive quality in the chess sphere. Vallejo got his first victory today, this time over Ponomariov. 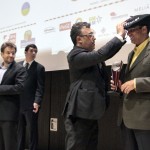 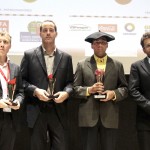 The Indian Grandmaster succeeds his opponent today, Levon Aronian, in the Masters Final title. Aronian has won the title twice, the last one in 2013, just like number 1 in the world ranking and reigning world champion Magnus Carlsen. The list of winners includes Veselin Topalov from Bulgary, who won the first edition back in 2008 (and was also proclaimed winner with Socar in the teams tournament), and his great rival and “worst enemy” Vladimir Kramnik from Russia, who won in 2010. 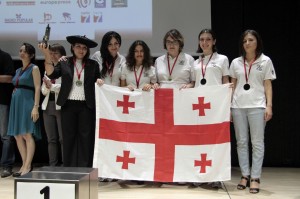 Players with the best performances on individual boards were also awarded. In the women’s section, the prizes went to Hou Yifan (board 1), Alexandra Kosteniuk (board 2), Anastasia Savina (board 3) and Marina Guseva (board 4).  In the Open section, the prizes went to Fabiano Caruana (board 1), Veselin Topalov (board 2), Harikrishna Pentala (board 3), Anish Giri (board 4), Teimour Radjabov (board 5) and Mateusz Bartel (board 6).

The Bilbao Chess 2014 gathered the world chess elite in Bilbao between 14 and 20 September. Participating were 9 of today’s top 10 players in the world and most of the world’s best grandmasters, divided in 60 teams coming from 30 European countries.
The high competitive level displayed in Bilbao these days drew spectacular attention from the world chess sphere and broke the audience ratings which Bilbao’s organization had been increasing edition after edition.

Out of the world’s 200 million potential fans that follow the chess events on-line, 44 million people from all over the world (mainly from Europe, India and China), followed Bilbao Chess 2014 during the 7 days the competition lasted for. Most people followed the event on the tournament’s official sites, as well as the world’s main chess portals. Masses of people went into the Euskalduna Congress Centre every day to watch the games on site.

The teams participating in the tournament were equally satisfied with the organization of the event — no complaints have been placed in the mailboxes the organization put up in order to provide all the competing delegations with the best possible service.