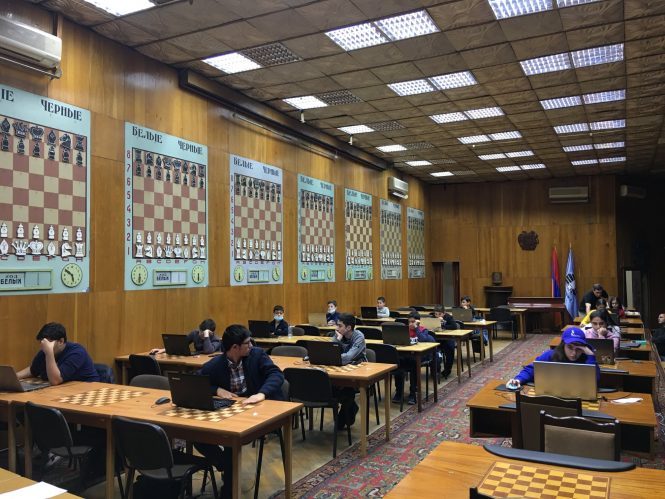 Seven rounds have been already played at the European Youth&Junior Hybrid Chess Championships 2021 and only two rounds left before the announcement of the Winners.

The event is played in 7 age categories: U8, U10, U12, U14, U16, U18 and U20 (open and girls separately), in Swiss system, 9 rounds, through Tornelo playing platform. 33 European National Federations and 900 young talents participate in the event, playing from 58 approved venues.

Most of the sections got the sole leaders, entering the last two rounds fighting for the medals.

Two Russian comrades tie for the top in Open U8 section with 6.5 points each: Kleimenov Nikolay (RUS, 1645) and Kleschevnikov Arseny (RUS, 1218). Oz Ege (TUR) and Nezhyvenko Mykhaylo (UKR) share the third place with score of 6 points each.

Negrean Andrei (ROU, 1847) dominates the Open U10 section with perfect score of 7 points. A group of 8 players tie for the second place, lagging behind with 5.5 points.

Russian girls showed the best scores till now in Girls U14 sections. Kobak Polina (RUS, 1694) and WFM Shvedova Alexandra (RUS, 2089) tie for the first place with 6 points, while their comrades WFM Mikheeva Galina (RUS, 2034) and WFM Zhapova Yana (RUS, 2315), together with Azerbaijani Abdinova Narmin (AZE, 1623) tie for the third place with 5.5 points, each.

All the results, standings and parings of the round 8 can be found here.

The penultimate 8th round of the event will start today from 16:00 CEST.

All the games are broadcasted live, and can be followed live through chess24.com, followchess.com, live.chessbase.com, and other broadcast platforms. Games can be also followed with LIVE commentaries by WIM Raluca Sgîrcea through the ECU Twitch channel.

ECU Secretary General, Mr. Theodoros Tsorbatzoglou joined the studio during the third round, and gave an insight into organization and the new rules of FIDE rated Hybrid competitions.

ECU Vice President, Ms. Eva Repkova, gave an interview during the European Youth&Junior Championships broadcast of the round 4.

ECU President Mr. Zurab Azmaiparashvili joined the live stream show of #EYCC2021 and had an interesting discussion with host of the stream, WIM Raluca Sirgea, about the ECU competitions, chess as an educational tool and future ECU plans.

Photo gallery of all venues can be found here.