European Youth Chess Championship 2015 was opened yesterday night in the city center, on the coast in front of hotel Neptun in Porec/Croatia.

The opening ceremony was attended by special guests, among whom the members of Istra county, the Mayor of Porec, Mr. Edi Štifanic, the representative of Coratian Olympic Committee, Mr. Siniša Krajac, etc.

The European Chess Union was represented by Mr. Adrian Mikhalchishin, who greeted all the present at the opening ceremony.

The technical meeting was held today at 11.00 am in the playing hall, where the chiefs of delegations were introduced the technical details  organization and were given the accreditations, after which the pairings were published. Chess-Results

The 1st round starts today at 3.00 pm (local time), with LIVE broadcast on the official website.

The Championship is played according to the Swiss System in 9 rounds, in 12 different groups: U8, U10, U12, U14, U16 and U18, Boys and Girls separately. The rate of play is 90 minutes for 40 moves, followed by 30 minutes for the rest of the game + 30 seconds increment per move, starting from move one.

Interesting fact is that the Croatian Chess Federation decided to create the special chess pieces that will be used during the Championship in Porec.

The ECU Educational Committee Meeting will be held during the Championship, 24-27 September 2015, as well as FIDE Seminars for Trainers, Arbiters and Organizers. 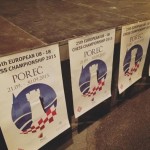 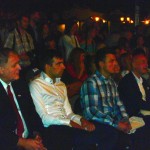 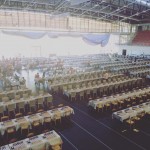