The Montenegro Chess Federation organizes the “December Days of Chess” in Podgorica from 10th to 20th December 2014, when numerous competitions and activities will be held.

The Montenegro Chess Federation feels it is time to get significant chess competitions again in the Capital, which has always been responsible for the development of chess in Montenegro, with a large number of chess players, and even larger number of chess fans. At the same time, the “December Days of Chess” will join the celebration of the 19th December, the day of liberation of Podgorica. 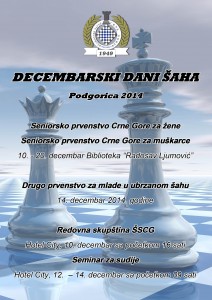 In the period from 10th till 20th December, the Montenegro National Championships for Men and Women will be held in the hall of the National Library “Radosav Ljumovic”. After more than twenty years, this is the first championship in the Men’s competition which takes place in the capital city. The last championship was played in Podgorica back in 1993. The Championship is very strong and gathers almost all the best players from Montenegro, members of the Olympic team, as well as the most promising players, so this will be the great opportunity to see the clash of generations – the combat between chess “veterans” and young players whose time is yet to come.

Women’s Championship has always been in the shadow of the Men’s championship and so it is this time. One of the main tasks of the Montenegro Chess Federation will be to improve the quality of women’s chess. Great results achieved by our women’s team, the individual results of Aleksandra Milovic and Marija Stojanovic at the Chess Olympiad in Norway, and especially the recent exceptional results of Tijana Blagojevic oblige us to do so.

Within the festival, on 14th December, the Montenegro Youth Rapid Chess Championship will be held. It is expected the participation of nearly 100 young chess players from all over Montenegro.

After a long break, the Montenegro Chess Federation organizes the Arbiter’s Seminar, 12-14 December at the Hotel City. A great interest has been shown for the seminar, as 20 participants have already applied so far.