Everybody knows that the game immediately ends with checkmate or stalemate, provided that the move producing it was legal (see 5.1.1, 5.2.1). The so called dead position doesn’t get nearly as much attention, but it should be quite familiar to all arbiters, because its identification can change a result of a game.

Article 5.2.2 states The game is drawn when a position has arisen in which neither player can checkmate the opponent’s king with any series of legal moves. The game is said to end in a ‘dead position’. It makes sense for this to also immediately end the game, since the ultimate goal of the game is no longer in reach for either player – the game is over.

The first position that comes to mind is two bare kings. Or that of king and knight vs. king, or king and bishop vs. king, etc. The game must end there; that is very clear to everybody. There is a slightly more complicated position seen in figure 1 (below). White is about to play c5, which leads to a dead position. 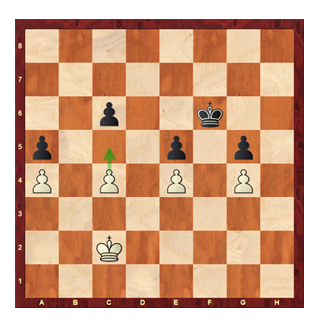 Even though there are many pieces on the board, it is not possible to win – to checkmate the opponent’s king – because both kings are trapped on their respective sides and the pawns cannot move, so the game ends immediately after White makes the move c5. In such cases, the players usually don’t protest and simply agree to a draw. 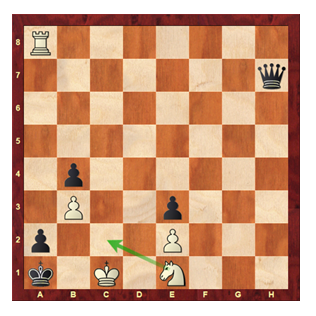 Dead position after the move Nc2+.

A problem may occur in cases such as the one in figure 2 (below). In this position, White went 48. Nc2+ which ends the game. It is no longer possible for either player to win, because the only series of legal moves is 48. … Qxc2+ 49. Kxc2 stalemate. So if, for example, White’s flag falls after the move Nc2+, it is a draw, because the game has already effectively ended. And if the arbiter observes such position it is his duty to declare a draw.