ChessBase GmbH is a German company that markets chess software and operates a server for online chess. It was founded in Hamburg, Germany, in 1986. It has a staff of 25 and, in addition, 104 contributing authors. The range of products extends to over 500 titles.

ChessBase maintains and sells massive databases containing most historic games. This permit analysis that had not been possible prior to computing. Databases organise data from prior games, engines provide analyses of games and perfect play in some endgames.

ChessBase produces or markets the Fritz family of chess engines: Fritz, Rybka, Houdini, Komodo, etc., along with their integrated graphic user interfaces (standard across the family). ChessBase also maintains a news page that is available in English, German and Spanish. It has over 100,000 unique visitors per day. 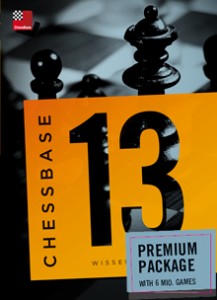 Playchess is a commercial Internet chess server edited by ChessBase devoted to the play and discussion of chess and chess variants. Playchess has more than 300,000 registered members, including many internationally titled players who remain pseudo-anonymous. The site has staged 645,000 tournaments since 2001, and a total of 585,000,000 games have been played on the server.

ChessBase produces many training DVDs, including monographs on famous players, tactical training exercises, and training for specific opening systems. They publish ChessBase Magazine six times per year, with articles on database updates (including annotated games), opening novelties and overviews, tactics, correspondence chess, and other section. All these are designed for viewing within the database software.