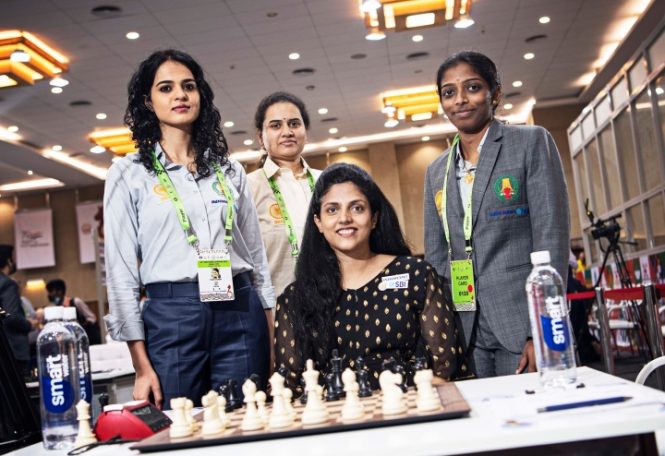 After six played rounds at the 44th Chess Olympiad 2022 in Chennai, teams of Armenia and India emerged as the sole leaders of Open and Women’s sections, respectively, scoring the maximum 12 match points.

In the tense sixth round, Armenia defeated India 2 taking a narrow 2.5-1.5 victory. Gukesh D won the game for India’s team B and scores impressive 6/6 on the first board. However, Ter-Sahakyan Samvel and Hovhannisyan Robert won their games on the third and fourth board, and with a draw in the game between Sarin Nihal and Melkumyan Hrant, Armenia deserved the sole leadership with 6 won matches.

USA won the match against Iran, as Caruana Fabiano defeated Maghsoodloo Parham while the other games finished in a draw. With yesterday’s victory USA emerged in a clear second place with 11 match points.

India’s Women’s team convincingly won the Round 6 match over Georgia with the 3-1 result and went on a resting day as the sole leader of the Women’s Chess Olympiad 2022. Koneru Humpy was victorious against Dzagnidze Nana on the first board, while Vaishali R won against Javakhishvili Lela. Games on the second and fourth board finished in a draw.

Romania and Azerbaijan tie for the second place with 11 match points each, as Romania played 2-2 against Ukraine, and Azerbaijan defeated Kazakhstan.

Tomorrow is the free day and the games continue on Friday, 5th of August, starting from 15:00 (local time). There are 5 rounds left to be played before the announcement of the Winners, and the 7th round brings interesting encounters between the leaders. Armenia will face USA on the top-board of the Open section and India plays against Azerbaijan in the Women’s event.

Pairings, results and standings can be found on the official website of the event.